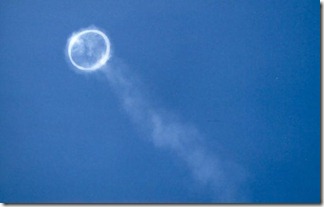 Back to some science stuff again, I’ve been meaning to do a blog post on smoke rings for a while, thinking that a simple description of what’s going on would be rather nice. The image to the right is of a “steam” ring blown by Mount Etna.

The explanation of smoke rings goes into the field of “fluid dynamics”; to a physicist a fluid is a liquid or a gas – some of the examples linked to here are of gas-in-gas rings (like the smoke ring), some are liquid-in-liquid rings and some are gas-in-liquid rings (bubble rings), the underlying physics is always the same.

A smoke ring is an example of a more general phenomena called a “vortex ring”. Scientists aren’t the only ones interested in fluid dynamics: this is a video of a dolphin playing with bubble ring. My fluid dynamics textbook helpfully points out that the velocity field around a vortex ring is equivalent mathematically to the magnetic field lines around a loop of current carrying wire. For a physicist this is a useful statement because it means you can carry across your understanding in one area to another – for non-physicists less so.

A vortex ring is made by pushing a pulse of fluid through a hole, friction slows down the fluid close to the edges of the hole whilst the fluid in the centre of the hole continues to move more quickly. On leaving the hole, fluid at the edges is rotating around the perimeter of the ring. Push the air to fast and the vortex ring won’t form, it’ll be destroyed by turbulence. You can see how this works in the image below (or, perhaps better, this video). The smoke in a smoke ring is only there to highlight what the air is up to – in liquids dyes can be used to reveal the patterns of liquid flow, or small particles. In the laboratory, small particles suspended in liquid can be illuminated by sheets of laser light to provide cross-sections through the flow patterns.

The first surprising thing about smoke rings is their persistence – for a gassy disturbance they maintain their shape for a remarkably long time. The smoke is actually trapped inside the vortex, and can only diffuse away slowly. By their very nature vortex rings are obliged to travel along in the direction of their axis, as the core of the vortex ring gets larger the forward motion of the ring slows.

Beyond simple vortex rings: we can also see vortex rings colliding and breaking up into rings of rings, and vortex rings overtaking – a faster vortex ring forces a slower one to expand whilst it passes through. These behaviours are all understandable using fluid dynamics, and can be simulated in a computer.

Vortices can also be found in lines, a vortex ring is simply a vortex line with the two loose ends tied together. Tornados and the whirlpool of water going down the plughole in the bath are examples of vortex lines.

Vortex rings are simply one facet of fluid behaviour arising from “vorticity”, that’s to say the behaviour of spinning packets of fluid. The “packets” being a handy conceptual device of breaking up a body of fluid into little pieces for further consideration. From a historical point of view, vortex lines were first understood by Helmholtz (1858), with some details added later by Kelvin (1867). What’s interesting about the Kelvin paper is that it was written at a time when the existence and understanding of atoms was in it’s infancy and there was some thought that atoms may be made from vortex rings (this turns out not to be true).

More generally fluids are understood using the Navier-Stokes equations which are a combination of Newton’s laws for fluids (forces make things move), viscosity (friction for liquids) and pressure. Beyond this the effects of surface tension, chemical reactions and magnet and electric fields to introduce ever more complexity. Even with the equations in hand, there is a large difficulty in solving them to produce useful results – just how fast can I pump liquid through this complicated shape?

Research into fluid dynamics is important for practical reasons (like making aeroplanes fly, simulating the weather and understanding how liquids move through all manner of mechanical devices from aerosol sprays to hydroelectric power plants) but it’s also just plain fun.

These videos of vortex rings are well worth a look:

There’s many more like this, try searching You Tube for “vortex rings”.