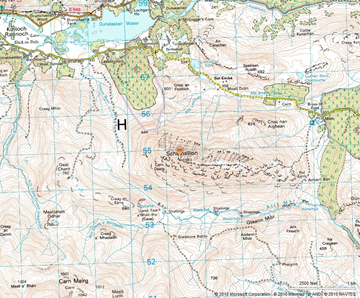 This post is about Nevil Maskelyne and his 1775 measurements of the Scottish mountain, Schiehallion (know locally at the time as Maiden-pap), made in order to determine the mass of the earth. My interest in this was stimulated by the Gotthard Base Tunnel breakthrough, since the precision of drilling seemed pretty impressive (8cm horizontal, 1cm vertical see here). There’s a technical explanation of the surveying here. You may wonder how these two things are related.

It’s all about gravity: gravity is the force exerted by one object on another by virtue of their masses. The force is proportional to the masses of the two objects multiplied together divided by the distance between the centres of the two objects squared. This is Isaac Newton’s great insight, although he only applied it to the orbits of celestial bodies. The mass of an object depends on both its density and its volume.

Maskelyne measured the mass of Schiehallion by looking at the deviation of a plumb line from vertical. The problem for the Gotthard Tunnel is that, if you’re surveying underground, measuring the vertical could be hard because if the density of the rocks around you is different in different directions then a plumb-line will deviate from vertical. Actually it’s probably not a huge problem for the Gotthard Base Tunnel, the deviations Maskelyne measured were equivalent to about 1cm over the 14km length of the Gotthard Base Tunnel sections. Furthermore Maskelyne was looking at an isolated mountain: density of about 2500kgm-3 surrounded by air: density about 1kgm-3, under the Alps the variations in density will be far smaller. So we can relax – density variations probably won’t be an important effect. Although it’s interesting to note that the refraction of light by air is significant in the Gotthard Tunnel survey.

Oddly, Newton didn’t consider Maskelyne’s measurements possible, thinking that the force of gravity was insignificant for objects more mundane than worlds. However he demonstrated that for a largish mountain (3 miles high and 6 miles wide) there would be a deviation of the plumb line from vertical of “2 arc minutes”. Angles are measured in degrees (symbol:o) – there are 360o in a circle. Conventionally, if we wish to refer to fractions of a degree we talk about “minutes of arc”, there are 60 minutes in a degree; or even “seconds of arc” – there are 60 seconds of arc in 1 minute of arc. 1 second of arc is therefore 1/1,129,600th of a circle. At the time of Newton’s writing (1687) this deviation of 2 minutes of arc would have been measurable.

Why is measuring the mass of a mountain a job for the Astronomer Royal, as Nevil Maskelyne was at the time? Measuring how much a plumb line is deflected from the vertical is not simple because normally when we want to find vertical we use a plumb line (crudely a string with a weight at the end). The route out of this problem is to use the stars as a background against which to measure vertical. Maskelyne’s scheme was as follows:

Measuring the location of stars to the required accuracy is a tricky business since they appear to move as the earth turns and the precision of the required measurement is pretty high. I worked out that using the 3m zenith sector (aka “telescope designed to point straight up”) the difference in pointing direction is about 0.1mm for the two stations – this was measured using a micrometer – essentially a a fine-threaded screw where main turns of the thread only add up to a small amount of progress. The ground survey doesn’t have such stringent requirements, although rather more time was spent on this survey than the stellar measurements.

Reading the 1775 paper that Maskelyne wrote is illuminating: at one point he lists the various gentleman who have visited him at his work! The work was paid for by George III who had provided money to the Royal Society for Maskelyne to measure the “transit of Venus”, some cash was left over from this exercise and the king approved it’s use for weighing the earth.

The value for the density of the earth that Maskelyne measured 235 years ago is about 20% less than the currently accepted value – not bad at all!