Book Review: For all the tea in China by Sarah Rose 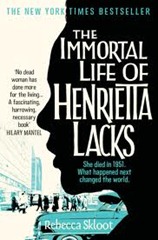 Henrietta Lacks’ cells were taken at the Johns Hopkins Hospital in Baltimore in 1951 and cultured by George Gey during her treatment for an aggressive cervical cancer from which she subsequently died at the age of thirty-one, later that year. Gey, with the help of Lacks’ cells, was the first person to successfully maintain a cell-line. The cells cultured are cancer cells rather than normal cells. Following his work a wide range of other cell-lines were cultured from a variety of organs and species, however it subsequently turned out that many of these were actually the HeLa cell-line which turned out to be particularly pernicious. Researchers would start with a culture of different cells, but they would die to be replaced by HeLa cell “contaminants”.

Once Gey had started the cell-line he gave them away freely to other researchers, however it was not very long before the HeLa cells were being sold commercially. An early application of the HeLa cell-line was in testing the newly developed Salk vaccine for polio, the first of many, many applications. More dubiously Chester Southam injected the cancerous cells into prisoners, and subsequently into many patients. This was with the view to seeing if they developed within the body, the problem was that the patients were not informed that the cells were cancerous. This practice ended when three young Jewish doctors aware of the Nuremburg Code, proposed as a result of post-war trials of Nazi doctors responsible for horrific human experimentation, refused to take part in the experiments.

To my mind the unique part of the book is the in depth coverage of Henrietta Lacks’ family through to the present day. Rebecca Skloot tells in detail the long persistent trail to talk to them, an African-American family who certainly have good reason to be suspicious of white people asking about Henrietta. The Lacks’ were never a model family but then there is no reason for them so to be. Race and medicine have a poor history in the US. The Tuskagee Syphilis experiments perhaps being the lowest point, in which African-Americans were denied effective treatment for the disease so the full course of its symptoms could be observed. Other racism is less direct, as relatively poor Americans the Lacks family have reduced access to the treatments arising from the cells of their ancestor. If she were a white child, Elsie Lacks, Henrietta’s mentally disabled daughter would not have died at the Crownsville State Hospital, certainly not in such terrible circumstances.

To my mind the real shortcomings of the scientists were not in what they did in the first instance but how they failed to support the Lacks’ not with money but with information. Until Skloot and Christoph Lengauer showed them and spoke to them, no-one had explained exactly what cells had been taken, what had been done with them, the significance of Henrietta Lacks to science or the specific knowledge of her condition did or did not have to their health in terms which they could understand; giving them a book on cell biology was not enough.

Skloot relates three stories of discoveries arising from a specific persons’ cells: the Lacks story and those of Ted Slavin and John Moore. Slavin was born a haemophiliac and as a result of the blood transfusions that he had to receive as a result of his condition he contracted Hepatitis B, however he did not succumb to this disease, he was immune. His doctor told him that this made him special, and that his blood was valuable and he subsequently profited from this knowledge by selling samples of his blood. John Moore, on the other hand, had hairy-cell leukemia and only discovered his blood was valuable after his doctor had patented his cell-line, he was subsequently involved in lengthy legal action to regain some control of his cells.

As a scientist whose work once touched, peripherally on human tissue culture and who recently had surgery from which such tissue was taken this is a somewhat uncomfortable story. In the project I worked on a postdoc was tasked with organising consent forms for, I think, blood vessels removed during a procedure i.e. they were a by-product. In this instance the specifics of the cells were not important – they were destined for frequently unsuccessful experiments. From our point of view the best possible outcome would been that the materials we had synthesised proved to be a congenial home for blood vessel wall cells. In this case nothing of monetary value is derived directly from the donors cells.

For my own part: I have no problem with researchers using my medical offcuts, I do feel unhappy with the idea that my specific cells might be valuable and that I might not get a proportion of that value.