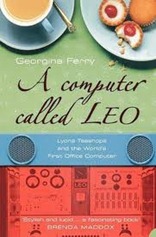 This is a review of “A Computer called LEO” by Georgina Ferry, recounting the story of the first computer developed for business use by J. Lyons & Co, the teashop and catering company.

Lyons formed in 1884, a spin-off from a family tobacconist company whose traveling salesman realised that there were few reliable teashops around the country, furthermore catering at large events such as the Great Exhibition was poor. Over the next 30 years or so the business grew, with a chain of teashops, and smarter establishments such as the Corner Houses and Trocadero. The teashops were supplied by Lyons own manufacturing and delivery service.

By the 1930s Lyons had approximately 30,000 workers, as such it was one of Britain’s larger employers. 300 clerks were used to tot up daily takings on mechanical calculators. Clerical work had risen in important during the second half of the 19th century with numbers rising from 70,000 in Britain in 1851 to 2 million in 1901. The company had a department of Systems Research led by a Cambridge mathematician, John Simmons, who the company had recruited in 1923, the hiring of such a graduate was a novelty at the time. The Systems Research department was interested in the efficient running of the business.

By this time various items of office machinery were commonplace, things such as filing cabinets, typewriters, mechanical calculators, and punch card readers. Telephone exchanges were in place, the electronic valve had been invented in the early years of the 20th century and magnetic storage devices were starting to become available. By the 1930s people such Oliver Standingford in Lyon’s Stock Department were talking about machines which would combine these elements, although he was not clear on the detail of how this would be done.

The Second World War then intervened, Lyons cut table service from its teashops as labour went short. Various people gained useful experience in electrical engineering through the wartime developments in radar, and possibly codebreaking. We now know that Colossus, a computer used for code breaking, was built at Bletchley Park during the war but it did not become public knowledge until 1974. In the US ENIAC had been developed at the Moore School in Philadelphia to do artillery range calculations. This was not a secret and immediately after the war, Oliver Standingford and Raymond Thompson visited from Lyons; they had a broad brief to investigate American business methods but it was ENIAC which really captivated them. Fortunately, their US trip put them in touch with more local expertise in the form of Douglas Hartree at Cambridge University who was building a computer, EDSAC, for the Mathematical Laboratory.

Lyons decided fairly quickly to construct their own computer, which was to be based on the EDSAC machine; US machines such as they were could not be purchased because of currency restrictions and there were no computer manufacturers in the UK. From the start LEO I (the first computer) was different, Simmons saw the computer fitting into a system of “scientific management” and as such LEO was crafted to exactly fit the role he foresaw for it based on detailed knowledge of the company’s processes. In some senses computing for business was more demanding than the computation done in the Mathematical Laboratory and other scientific laboratories: business computing had large demands for input and output (imagine a payroll system – it needs to read in details of each employee and print out the results), it had lower tolerance for failure (payroll failing to run has a serious impact on employees) and calculations could be more “complex” than mathematical ones in the sense that more steps in calculation and more conditionality was required. It was at Lyons that the art of flowcharting was developed. The first live duty that LEO carried out was in 1951, it was made public in 1955. It’s interesting to note that Charles Babbage had highlighted the potential for automation in both manufacturing and mathematical operations in his book “On the Economy of Machinery and Manufacturers”, published in 1832.

There were to be two further LEO computers, developed by a separate company, Leo Computers Ltd however things did not go well. The computers themselves were technically advanced, and the Leo Computers method of going into a business and closely examining their processes before writing programs and delivering a system combining both hardware and software usually had excellent results. However, this had the unfortunate side-effect of losing their best staff to their clients. Other problems were afoot: Leo Computers Ltd although nominally a separate company was under-resourced both financially and in personnel with development engineers also acting as salesman. The parent company, Lyons was struggling – victim of a family business mentality which put increasingly useless family members at the heads of divisions.

In 1964 Leo Computers Ltd was merged with English Electric, with Lyons divesting itself of any responsibility, following this union the LEO line died although the final computers in the series were installed by the Post Office, and continued to run there, in places, until 1981.

In contrast in the 1960s IBM were able to make an investment of $5billion on their System 360 computers – a compatible range designed to fit every need. They had a ready market in the US both of businesses willing to buy, unlike their British counterparts, and a government who bought locally first. Faced with this opposition, the British computer industry struggled to compete.

Focusing on the LEO computer makes this a human scale story with central cast of characters, but it also provides a wider view of the field in the years after the Second World War. The book makes clear how J. Lyons & Co had a system of management, and personnel in place which were ripe for computerisation; the developments in the 1930s made it clear that electronic computers were in the air. Large scale failures of computer systems in both public and private sectors are onging, John Simmons was rather insightful in his intimate coupling between business process and software system.

1. My Evernotes are here

2. The web page of the Leo Computer Society is http://www.leo-computers.org.uk/