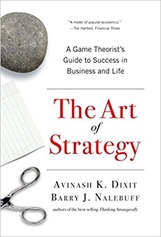 Next up, some work related reading. The Art of Strategy: A Game Theorist’s Guide to Success in Business and Life by Avinash K. Dixit and Barry J. Nalebuff.

The Art of Strategy is about game theory, a branch of economics / mathematics which considers such things as the “ultimate game” where one player choses how to split $100 (i.e. keeping $60 and giving away $40) and a second player decides to accept or reject the split, in the latter case neither of them gets any money. In the former case they get the offered split.

In the “prisoners dilemma” two prisoners are each offered the opportunity to give evidence against the other. If one of them does this, and the other doesn’t, then they will be set free, whilst their fellow prisoner services a sentence. If both betray the other then they will both serve a longer sentence than if they had both kept quiet.

The ultimate game and the prisoners dilemma provide a test bed for game theory, normally illustrating that real humans don’t act as the rational agents that economics intended! For example, in the ultimate game players really should accept any non-zero offer since the alternative is getting nothing, in practice players will reject offers even as high as $10 or $20 as unjust.

The first part of the The Art finishes with some strategies for simultaneous games. These are to look for dominant strategies where they are available, i.e they are the best strategy regardless of what the other players do. If this isn’t possible eliminate dominated strategies, i.e. those which are always beaten by your opponent. Nash equilibria are those moves which could not be improved, even given knowledge of an opponents moves. There can be multiple Nash equilibria in a game, which means if strategies are not explicitly stated the the players must guess which strategy the other player is using and act accordingly. This section also covers how social context influences play, and ideas of “punishment”.

The second part of the book looks at how the strategies described in the first part are used in action, although these examples are sometimes somewhat hypothetical. This part also introduces randomness (called “mixed strategies”) as a component of strategies.

The final part of the book covers applications of game theory in the real world, including auctions, bargaining and voting. I was interested to learn of the several sorts of auction, the English, Dutch, Japanese and Vickrey. The English auction is perhaps the one we are the most familiar with, participants signal when they wish to make a bid, and the bid rises with time. The Japanese auction is similar in that the bid is always rising but in this case all bidders start in the auction with their hands raised (indicating they are bidding) and put their hands down when the price is too high. A Dutch auction is one in which the price starts high, and drops, the winner is the one who first makes a bid. Finally, a Vickrey auction is a sealed-bid auction where the winner is the one the makes the highest bid, but they pay the second highest value.

Auctions are big money, the UK 3G spectrum auction in 2000 raised £22.5 billion from the participants. It’s worth spending some money to get the very best game theorists to help if you are participating in such an auction. The section on bargaining is relevant in the UK at the moment given the Brexit negotiations, particularly the idea of the Best Alternative to a Negotiated Agreement (BATNA). Players must determine their pay off relative to the BATNA, and must convince their opponents that the BATNA is as good as possible.

I found the brief descriptions of  concrete applications of game theory such as in the various “spectrum” auctions for mobile phone systems, and the formation of price fixing cartels the most compelling part of the book.

Game theory is a central topic in at least parts of economics, as witnessed by the award of the pseudo-Nobel Prize for Economics in this area – there is a handy list here (http://lcm.csa.iisc.ernet.in/gametheory/nobel.html), if you are interested.

The Art of Strategy has some overlap with books I have read previously, the decision tree/game trees have some relevance to Risk Assessment and Decision Analysis with Bayesian Networks by Fenton and Neil (which uses the Monty Hall problem as an illustration). The Undercover Economist by Tim Harford discusses game theory and its relevance to the mobile frequency auctions in the UK, as well as the example of information in buying second hand cars. The Signal and the Noise by Nate Silver has some discussion of gaming statistics.