Continuing with the guitar theme here I review 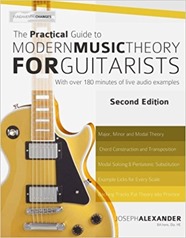 The Practical Guide to Modern Music Theory for Guitarists by Joseph Alexander. Reading the Beginner’s Course I felt I was missing out by not understanding why there were the notes there were and how they could be put together. The Beginner’s Course gave me enough knowledge to realise that generally songs were not just made by mashing a whole pile of notes together and hoping for the best.

My background is in physics, so I have very clear ideas as to what I consider to be a theory. Physics covers music somewhat indirectly, during training physicists are taught about “oscillations and waves” and “harmonic oscillators”. So to a degree I approach this book expecting to find a physics-like theory, music theory is not like physics theory.

The book is divided into two parts. The first part covers how musical scales are constructed, how chords are formed and chord progressions. The second part talks about each of the modes of the major scale, with fine names such as the Dorian, Lydian, Mixolydian and the Phrygian. Following some introductory material the second part of the book follows a regular pattern for each of this modes, so has the feeling of a reference section.

I found the first section jumped in a bit fast, I’ve not looked at musical scale notation for a very long time, and would have welcomed a bit more explanation. A guide to guitar tab notation would also fit well in here. The basics of both of these forms are straightforward enough but there are various symbols and conventions which are difficult to search for and could have been usefully collected here.

Indeed the existence of natural, sharp and flat notes is not explained. As I understand the natural notes A,B,C,D etc where discovered in antiquity to provide harmonious music. Although there are hints here that in the Western world we have all been trained to hear harmonious music in tunes composed from natural notes.

The natural notes represent musical sounds which have certain relationships in terms of frequency. The sharps and flats were added some time later based on a uniform division of the octave (a doubling of frequency) into 12 evenly spaced notes (in frequency). The notes on this scale fall approximately onto the natural notes but in addition provide some sharp and flat notes. The notes F flat and C flat do not exist which explains the irregular appearance of a piano keyboard and makes everything more complicated. The interval between a natural note and its sharp or flat is a semitone. The interval between two consecutive natural notes is a tone.

The C major scale comprises all the natural notes starting at C (CDEFGABAC), since natural notes are not evenly spaced in frequency this means that the steps between notes are not equal in size. No problem for a scale starting at C but if we form try to form a scale starting at a different natural note such as A (ABCDEFGA) then it sounds “wrong”, in fact this is a minor scale not a major one. To make a major scale we need to match the pattern in step sizes found in the C major scale which for A is (A, B, C♯, D, E, F♯, G♯). The non-uniform nature of the gaps between notes in the major scale makes the rules for forming scales very wordy.

I’m leaving it as an exercise for me to write Python code that constructs scales, this would help me see music theory as a more physical theory.

Chords are sets of three notes drawn from scale with the same spacing on the scale, so on the C major scale the C chord is formed of the first, third and fifth notes (CEG), similar we can make chords D (DFA) and E (EGB). Where there are whole tones between the first two notes in the chord is a a major chord, if there is only 1.5 tones then the chord is a minor chord.

Early in the book Alexander makes reference to how the major scale is “too bright” for rock, this comment along with others later in the book discussing different modes and which forms of music they suit was intriguing to me but no expanded upon. Similarly with chord progressions (sequences of chords) there is clearly some theory as to moods that different chord progressions invoke but there’s no discussion of this in the book. This is where musical theory diverges from physical theories.

Looking back I think I picked up this book too early. It feels like revision notes for someone taking a rather high level music examination. I’ve certainly learnt from it and I can see it as a useful reference in future but for me it raised more questions than provided answers.