This review is a bit of a departure for me, it is of 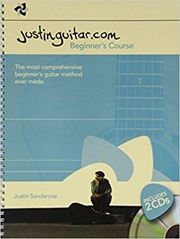 I’m a big fan of book learning, so when I decided to learn how to play the guitar a book was the obvious place to start. To be honest I picked the justinguitar.com book largely because it was ring-bound, a quick search reveals many other options but envisaging how I would use the book a ring-bound version seemed to make sense.

It turns out this somewhat arbitrary method of selection has worked out quite well. The book is accompanied by a substantial website (https://www.justinguitar.com/), which includes free video versions of the lessons in this book, amongst much other, mainly video, material. The videos are typically less than 10 minutes long, which is ideal. Looking around similar video courses Justin Sandercoe is, by comparison, clearly a very good teacher. His videos are quite casual in their feel but focussed and well put together. There are also purely app based guitar course but that seemed a bit modern for my tastes.

I got on really well with the chord change aspect of each stage, you’re invited to record how many chord changes you can do in a minute – which is absolutely my thing! I have a spreadsheet recording how my pace has increased over time. I have made satisfying progress. I also feel somewhat triumphant that I can do apparently notorious F-barre chord although don’t ask me to change to and from any other chord at any great rate.

There is an associated songbook, each stage enables a few different songs. I haven’t made a great deal of use of this yet. I found each stage came with a list of 10 songs but I didn’t know which to focus on to improve my skills. Possibly the answer is “any of them”, choose the ones that appeal to your musical taste.

The emphasis is very much on the rhythm side of guitar playing which isn’t where crowd pleasing showing off lies. Sandercoe does have videos showing you how to play classic guitar riffs (like Smoke on the Water, Seven Nation Army, Creep) but these aren’t included in the book. I found these more motivating than the songbook.

It has taken me a couple of months to get through the first 6 stages of the book. I’ve jumped ahead for a few things – starting to play scales, experimenting with fingerstyle playing and playing a 12-bar blues shuffle. As it stands my chord change rate is a bit lower than the goal for the whole book and I’m not very good at strumming and changing chords, certainly not strumming anything but the simplest patterns.

Beginner’s Course includes listening exercises at each stage, I must admit I didn’t do well with these. I practiced them using an unrelated app which probably didn’t help – I felt I wasn’t making progress. The focus of the app was very much on the speed at which you could recognise chords rather than accuracy.

There’s a little bit of music theory included in this beginners course – simple stuff relating to where notes appear on the guitar fretboard but there’s no real discussion of how chords are constructed and the relevance of musical scales and chord progressions. I’ve looked elsewhere for this since I’m interested, I think Sandercoe actually introduces quite a lot of this material indirectly.

What I’ve really enjoyed in playing guitar has been managing to do a recognisable rendition of Seven Nation Army by The White Stripes within a couple of weeks, playing the 12-bar blues shuffle from the beginners course book, making a passable attempt at Creep by Radiohead. I think my next task is to hunt out the videos for songs that Sandercoe has done which appeal to me and give me motivation to practice some key skills. At the moment I have my eyes on Smells Like Teen Spirit (power chords), Jolene (finger style playing). Hey Joe (riffs), Thunderstruck (fast, simple riffs). It helps that these tracks will impress the girl in my life (Mrs H, aged the same as me).

This review is different from most of my book reviews, it is more about how this beginners course works for me than a review of the book in itself. Learning to play the guitar competently is the work of years, this book is a good start on the path.