Why is that butterfly blue? 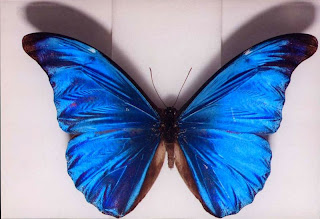 To understand how this works, we first need to know that  light is a special sort of wave known as electromagnetic radiation, and that these waves are scattered by small structures.

The Spectrum of visible light (Image from Wikipedia)

Things have colour either because they generate light or because of the way they interact with light that falls upon them. The light we see is made of many different wavelengths, the visible spectrum. Each wavelength has a colour, and the colour we perceive is a result of adding all of these colours together. Our eyes only have three different colour detectors, so in the eye a multiplicity of wavelengths is converted to just three signals which we interpret as colour. The three colour detectors are why we can get a full colour image from a TV with just three colours (red, green and blue) mixed together. Some other animals have more colour sensors, so they see things differently.

The problem with viewing the small structures that lead to the blue colour of the butterfly wings is that they have interesting features of a size about the same as the wavelength of light, and that means you can’t really tell much by looking at them under a light microscope. They come out blurry because they’re at the resolution limit. So you resort to an electron microscope, electrons act as a wave with a short wavelength so you can use an electron microscope to look at small things in much the same way as you would use a light microscope except the wavelength of the electrons is smaller than that of light so you can look at smaller things.

So how to explain resolution (how small a thing you can see) in microscopy. I would like to introduce you to a fresh analogy in this area. Summon up in your mind, a goat (tethered and compliant), a beachball (in your hands), and a ping-pong ball (perhaps in a pocket). Your task is to explore the shape of the goat, by touch, via the beachball, so proceed to press your beachball against the goat. The beachball is pretty big, so you’re going to get a pretty poor tactile picture of the goat. It’s probably going to have a head and a body but the legs will be tricky. You might be able to tell the goat has legs, but you’re going to struggle to make out the two front legs and the two back legs separately. Now discard the beachball and repeat the process with the ping-pong ball. Your tactile picture of the goat should now become much clearer. The beachball represents the longer wavelength of light, the ping-pong ball the shorter wavelengths of electrons in an electron microscope.

And now for scattering; retrieve your beachball; step back from the goat. You are now going to repeatedly throw beachball and ping-pong ball at the goat and examine where the balls end up having struck the goat. This is a scattering experiment. You can see that how the ball bounces off the goat will depend on the size of the ball, and obviously the shape of the goat. This isn’t a great analogy, but it gives you some idea that the shape of the goat can lead to different wavelengths being scattered in different ways.

So returning to the butterfly at the top of the page, the iridescent blueness doesn’t come from special blue molecules but from subtle structures on the surface of the wings. These are pictured below, because these features are smaller than the wavelength of light we need to take the image using an electron microscope (we are in ping-pong ball mode). The structures on the surface of the butterfly’s wing look like tiny Christmas trees. 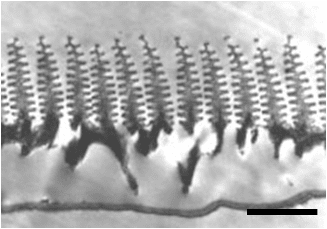 Structures on the surface of a morpho butterfly wing (scale bar 1.8 micron)

These structures reflect blue light really well, because of their shape, but not other colours – so the butterfly comes out blue.

Another example of special structures that interact with light is this is a *very* white beetle: 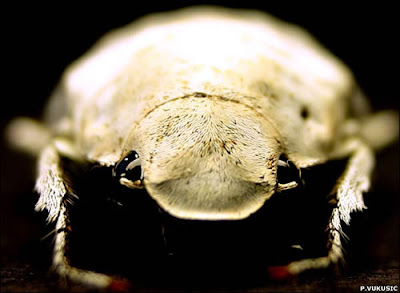 Cyphochilus beetle (Image by Peter Vukusic)
The cunning thing here is that the beetle manages to make itself very white, meaning it reflects light of all wavelengths very efficiently, using a very thin scales (5 micron). This is much better than we can achieve with synthetic materials. The trick is in the detail, once again the scales have a complicated internal structure as you can see in this image from an electron microscope: 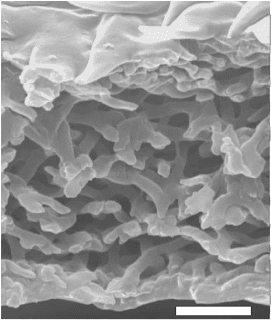 Cross-section of a beetle scale (scale bar is 1 micron, Image by Peter Vukusic )

It turns out that the details of the distribution of the scale material (keratin) and air in the scale conspire to make the scale highly reflective. Making things white is something important to a number of industries, for example those that make paint or paper. If we can work out how the beetle does this trick then we can make cheaper, thinner, better white coatings.

Finally, this is something a little different. If you’ve got eyes, then you want to get as much light into them as possible. The problem is that some light gets reflected from the surface of an object, even if it is transparent – think of the reflection of light from the front surface of a clear glass window. These structures: 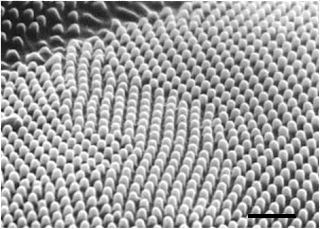 The surface of a butterfly’s eye (scalebar 1micron, Image by Peter Vukusic)

In these cases animals have evolved structures to achieve a colour effect, but more widely we see structural colours in other places like rainbows, opal, oil films and CDs. The sky is blue for a related reason…

Sources
The work on butterflies and beetles was done by a team led by Peter Vukusic at Exeter University: