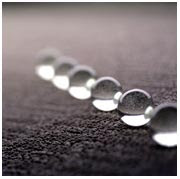 It feels like I’ve not really been writing about science very much recently, so I thought I’d return to some work on which I spent a few years, with my former PhD student, Pietro Cicuta.

We looked at the properties of a protein from milk (β-casein) spread on the surface of water: principally the effect that it had on the surface tension as a function of amount of protein. Experimental variables were the acidity and saltiness of the water. We did this using a Langmuir trough which I’ll describe below. b-casein is what’s known as a random coil protein: in contrast to many proteins, which curl up into a well-defined, unique shape, β-casein flops around like a piece of string. This work is directly relevant to people working in the food industry, and more generally interesting to people who work with polymers (chemists) and proteins (biologists).

β-casein acts as a surfactant which helps stabilise fat globules in milk. Surfactants are common type of molecule, the name is a contraction of “surface”, “active” and “agent”, unsurprisingly they are found at surfaces: typically between one liquids, like oil and water, but also at interfaces between liquid and air. Surfaces are important, they keep the inside in, and the outside out. Surfactant molecules help with this important process by stabilising surfaces (the natural tendency of liquids is to form big blobs, surfactants stop this process). Some examples: the cells in your body are surrounded by surfactants, mayonnaise contains surfactants from egg which keep the oil suspended in the water, all manner of cleaning products for clothes, hair, work by using surfactants to stabilise dirt in water, and foams are formed using surfactants.

To achieve this magic surfactants share a common feature: part of the molecule likes oil and part of the molecule likes water, so to keep both parts happy they hang around at interfaces. Most surfactants are like little tadpoles with water-loving heads and water-hating tails. β-casein is a bit different, parts of the string like water, so they try to stick into the water and parts don’t like water so they head for the air. However changing the acidity and saltiness of the water changes the strength of the love for water.

In most cases substances love water because they have an electrical charge, and this is why salinity and aciditiy are important in this experiment: if you change the acidity of the water the electrical charge on the protein changes because of the chemistry of the protein, if you change the salinity then how well the water can see the charges changes. It’s a bit like fog, when there is no salt in the water it’s as if the electric charges are seen through clear air and their influence spreads far and wide, adding salt is like a mist reducing the visibility of charges until ultimately the electric charges can’t be seen at all. 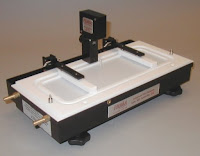 A Langmuir trough is a way of probing surfactant properties. It comprises a shallow trough made of Teflon, a barrier made of Teflon (which can be swept across the surface of liquid in the trough) and a surface tension sensor. Teflon is used because water sits on top of it forming a proud meniscus rather than spreading out, damply. The sensor is nothing more than a bit of filter paper attached to a force measuring device, dip it into the water and feel the pull – that’s surface tension. The idea with the barrier is that you place the barrier at one end of the trough, drop your molecules on the surface and then slide the barrier along, the molecules on the surface have few places to go so the decreasing the area amounts to increasing the concentration of the molecules at the surface. It’s really the 2D version of compressing a gas with a piston. I tried to find a picture of a trough with a single barrier, but couldn’t – the principle of the two-barrier trough shown here is the same, the black tower in the middle is the surface tension sensor.

Langmuir trough experiments are ideal for obsessive-compulsives: before you start your actual experiment you have to get the surface of the liquid you’re using absolutely clean. To do this you clean your trough, add in the ultrapure water, compress the surface, hoover (with a glass pipette connected to a vacuum pump) contaminants off the surface if there was an upturn in the surface tension, then go back to compressing the surface, hoovering the surface etc. Some times it just doesn’t work and you spend a morning trying to get your trough clean. Doing this for an oil/water interface is difficult, much more difficult actually I never succeeded. The core of the problem is that you don’t need much material to make a surface dirty, imagine painting a ball – the amount of paint required to cover the surface is much smaller than the volume of the ball.

The Langmuir trough was developed by Irving Langmuir, building on work by Agnes Pockels done towards the end of the 19th century. You’ll often see references to the Langmuir-Blodgett trough, the two terms seem to be used interchangeably but my understanding is that the Langmuir-Blodgett device is used to deposit surface active molecules onto a surface (which is not what we were doing). The Blodgett is Katherine Blodgett, who was the first woman to be awarded a PhD in Physics from Cambridge University.

From the surface tension data we extracted two things: firstly, how the protein molecules interact with each other – this comes from the early part of the compression data when the molecules are just starting to touch each other. Secondly, we get some idea of the innards of the protein from what happens when we squeeze the molecule harder and it starts to deform. Think of it like a bunch of eggs if you’re bouncing them around in a basket you find out about how bouncy they are, if you grab hold of one and squeeze it really hard you first discover that it has a tough outer shell, then you discover it has a soft squishy inside, then you discover you have egg all over your hands and you forgot to get the kitchen towel out before you started.

We find out this information about interactions and internal properties as a function of acidity and salinity, which we can then compare with theories of charged polymers. This comparison turned out to work quite nicely, and Pietro came up with a neat way of illustrating how bits of the molecule appeared to plunge into the water as the surface layer was compressed.

This is pretty much my most cited piece of work, with just less than 30 citations. So there you go, several years in the lab condensed into just over a 1000 words, although I didn’t mention the Surface Quasi-elastic Light Scattering (SQELS).