Some notes on SQL: 5 – database design

Some notes on SQL: 6 – Multi-table operations 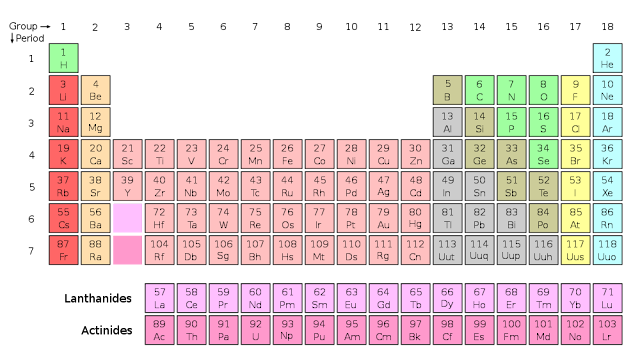 Understanding the Periodic Table is very much like making love to a beautiful woman, there’s no point rote-learning the location of the different elements if you don’t know what they do… langtry_girl*

The Periodic Table of the Elements is a presentation of the known elements which provides information on the relationships between those elements in terms of their chemical and physical properties. An element is a type of atom: iron, helium, sulphur, aluminium are all examples of elements. Elements cannot be broken down chemically into other elements, but elements can change. An atom is comprised of electrons, protons and neutrons.

This is all very nice, but if you look around you: at the wallpaper, the computer screen, the table – very little of what you see is made from pure elements. They’re made from molecules (pure elements joined together), and the molecules are arranged in different ways which may be completely invisible. So in a sense the periodic table represents the bottom of the tree of knowledge for people interested in materials, other scientists may be more interested in what makes up the elements.

The periodic table, approximately as it is seen today, was discovered by Dmitri Mendeleev in 1869, he designed it based on the properties of the elements known at that time. For a scientist the Periodic Table is pleasing, it says of the elements: “this many and no more”. It also stands as one of the great scientific predictions: Mendeleev proposed new elements based on his table constructed from the known elements and ,behold, they appeared with roughly the properties he expected.
Mendeleev’s periodic table was a work of organisation, it later turned out through the discovery of quantum mechanics that the periodicity and order found in the table can be derived from the behaviour of electrons in atoms.
To reverse a little, there is scope for more elements in the periodic table, they appear tacked on at the end of the table and are made artificially. The experimental scheme to achieve this is to fire atoms of existing elements into each other in the in the hope that they’ll fuse, occasionally they do, but the resulting atoms have a fleeting existence. They are rarely found in any number and vanish in fractions of a second, they are not elements of which you can grab hold. This has always struck me as being akin to flinging the components of a car off a cliff and claiming you have made a car when momentarily the pieces look like a car as they plummet to the ground.
I had a struggle here deciding whether to describe the periodic table as being designed, invented, or discovered. I stuck with discovered, because discovering is what scientists do, inventing is for inventors and designing is for designers ;-) It does raise an interesting philosophical question which has no doubt been repeatedly discussed down through the ages.

As a design, shown above, the periodic table is a cultural icon which everyone knows. Even if they don’t understand what it means, they know what it stands for – it stands for science. How to make sure people know your scene is set in a lab or your character is a scientist? Bung in a periodic table. It has been purloined to organise other sorts of information, such as Crispian Jago’s rather fine “Periodic Table of Irrational Nonsense“, some more examples here. There is a song.

At various times in my life I’ve been able to name and correctly locate all the elements in the periodic table, normally takes a bit of effort and some mnemonics to help. Increasingly now, I can remember the mnemonics but not the elements they refer to.

Different parts of the periodic table are important to different sorts of scientists. To organic chemists carbon (C), hydrogen (H), oxygen (O), nitrogen (N) hold the majority of their interest with walk on parts for some of the transition metals (the pink ones in a block in the middle) which act as catalysts. Inorganic chemists are more wide ranging, only really forbidden from the Noble Gases (helium (He), neon(Ne), argon (Ar), krypton (Kr), xenon (Xe)) which refuse to react with anything. Semi-conductor physicists are after the odd “semi-metals”: silicon (Si), indium (In), gallium (Ga), germanium (Ge), arsenic (As). For magnets there’s iron (Fe), cobalt (Co), nickel (Ni) along with other transition metals and the Lanthanides. The actinides are for nuclear physicists, radiation scientists and atomic bomb makers. Hydrogen is for cosmologists. In this view, as a soft condensed matter physicist, I am closest to the organic chemists.

I’m rather fond the periodic table, it is the scientist’s badge, but I’m scared of fluorine.

*To be fair to langtry_girl, I pondered on twitter “Trying to finish the sentence: “Understanding the Periodic Table is very much like making love to a beautiful woman…” and I think hers was the best reply. It is, of course, a reference to Swiss Toni.