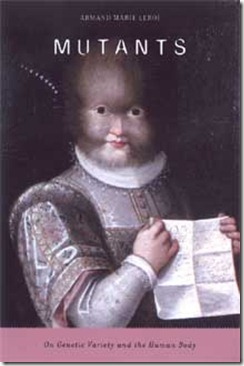 Christmas is a time for reading, so in addition to Rolt’s Brunel biography I have also read “Mutants: On the form, varieties & errors of the human body” by Armand Marie Leroi.

This is a story of developmental biology told through the medium of mutants, people for whom development doesn’t go quite to standard plan.

The book runs through a sequence of distinct mutations: Siamese twinning, deformities to arms and legs, skeletal defects, dwarfs and giants, various sexual variations, albinism and hairiness, and finally ageing. His approach does not revel in the freak show aspects of human mutants rather makes a brief reference to the historical recognition of such mutations and uses this as a jumping off point for discussion of modern biological understanding.

Mutations have long been an area for scientific study because it was realised that studying malfunction would provide clues to the mechanisms of normal development.

The marvel of developmental biology is that it is a method of construction completely at odds to the human way of making complex devices. Rather than a complex entity assembling pieces to a plan, biology starts with an instruction set which builds order out of chaos with no external help. It is self-organisation, creation from (nearly) nothing with no supporting infrastructure. There are non-biological self-organising systems and we make use of some of them industrially, but there is nothing that matches the complexity, the heterogeneity that biology can achieve.

The fundamentals of development biology are genes coding for proteins that tell you where you are in the developing embryo and trigger growth or differentiation on that basis i.e. “I find myself in the presence of proteins A, B, and C at these particular concentrations, therefore I must make a leg”. As an example, the proteins noggin and bone morphogenetic protein 4 (BMP4) define the top and bottom of the growing embryo – in simple terms noggin stimulates the growth of the brain. Whimsical naming of a protein may seem like a good idea in the lab but I imagine it makes discussions with parents about the problems of their perhaps-dead child difficult.

An intriguing point is the frequent robustness of developmental mechanisms, often as not molecular biologists have identified a “critical” protein, created a “knock-out” mouse lacking that protein and discovered that the mouse developed relatively well – other developmental systems having compensated for the loss.

The diverse effects of mutations can be surprising, for example there is a condition called Kartagener’s Syndrome whereby the internal organs of the body are flipped left-right – the heart, rather than lying slightly on the left of the body lies on the right and so forth. People with this syndrome have respiratory problems, a diminished sense of smell and sterility. The cause of these apparently disparate problems is a faulty cilia motor, cilia are small hairs on the surface of a cell that move. In the lungs and nose they whip about to move mucus around, in men the cilia motor drives the tail of sperm, and in the developing embryo the whipping of cilia break the left-right symmetry. Hence failure of the cilia motor proteins leads to a diverse set of impacts.

In addition to proteins which induce specific behaviours, there are proteins which have a more overarching impacts, such as those produced in the pituitary gland, malfunctions of which can lead to dwarfism or gigantism.

As usual my butterfly mind has fixed on some less relevant portions of the book. Plato giving voice to Aristophanes in The Symposium posited that sexual desire can be explained because man and woman were once combined: in fact three pairings existed man-man, man-woman and woman-woman. These creatures were physically joined, having four arms and legs, two heads and two “privy members”. However, they were troublesome (cartwheeling on their eight limbs is explicitly mentioned) – so Zeus separated them into the men and women. And now everyone seeks to find their original partner thus explaining homo- and hetero-sexuality. There’s some suggestion that Plato was making a little fun of Greek myth here!

Thanks to this book I have learned that the male scrotum is the homologous structure to the female labia, the two halves have fused to form a handy sack. The development of sexual organs finds the male really as something that has failed to become female.

Leroi finishes with signposts to a couple of open areas in developmental biology, one is race: people have a moderate ability to identify racial groups and tie them to countries but current genetics cannot match this ability often finding much bigger variations within populations. As Leroi highlights, this is a fraught area in social terms but it is interesting that differences obvious to people are not obvious to genetics. Secondly he mentions beauty: does beauty tell us something about genetic fitness?

This book highlights the huge gap between knowing the base pair sequence of DNA and understanding how the organisms arise from that sequence. At times the language gets technical a little too quickly and it could really have done with some explanatory diagrams.