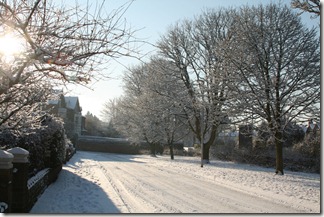 In a heroic attempt to be timely, I am writing a “Review of the [my blogging] year” post – it’s the first full blogging year for me.

A new feature after my first few months of blogging are book reviews: my house is full of books, and although I’ve read (nearly) all of them I can’t remember the contents. I don’t really consider my book posts to be reviews: they are notes on books for my own future edification. I generally only post on non-fiction although I did write more generally about science fiction. You can see all my reading for the year on Shelfari. The focus of my non-fiction reading is very broadly the history of science, I think my favourite of these was “The World of Gerard Mercator”; this is the story of mapmaking from a time when the full extent of the world was just being discovered. I’ve also read a lot about the Royal Society; this is their 350th anniversary year and, in Britain at least, it was at the heart of the scientific revolution. It’s through the Royal Society that I did my first bit of original source reading: “The History of the Royal Society of London by Thomas Sprat”, published in 1667. A strange experience stimulated by the people I have met on twitter.

Every so often I do a bit of hunting out of data; for example “A sceptical look at the economy” pulled together numbers on the deficit, the debt and how they have changed over time – a useful learning experience and something I refer back to. I also quite like “Occupations of MPs”, which shows that MPs are overwhelmingly barristers. News reports often fail to provide context to stories, and these posts are my attempts to find that context. At one point I even combined fiddling with data and the history of science in one post, extracting membership of the Royal Society data and plotting it: “The Royal Society and the Data Monkey”.

As a continuation of the data monkey thoughts, I did some blogging on computer programming which is my modern equivalent of fiddling about with projects in a shed. “That’s nice, dear” is an overview of programming and some pretty maps I made with election data, the title from my wife: it’s her usual response to me excitedly displaying my latest achievement! I also made “A set of blog posts on SQL” about which I kept very quiet. The hunting out of data and programming run together really, several of my data posts have been the result of significant amounts of programming, for example: “Yields from income tax”.

When I started blogging my intention was to blog about science, in a way that people who were generally not so interested in science might read. I’ve enjoyed doing this, my blog post on the periodic table is one of the most frequently accessed, possibly due to students doing their homework! Some of the scientific posts are on work I’ve done, such as “Understanding mayonnaise”, some are on things I simply find interesting: like “Fun with fluids” which features video of dolphins playing with vortex rings and others are about the life of a scientist, such as: “Publication, publication, publication”.

I’ve also done quite a lot of current affairs blogging, some of this is straightforward rant brought on by newspaper articles but some of it is party political. At the beginning of the year you wouldn’t have known I was a Liberal Democrat party member – I think everyone knows now! Amongst other things I did a post election summary here, and more recently I wrote a slightly more philosophical post. Perhaps most entertaining is my doom-laden post election “I was up for Evan Harris”, my most visited post for the year – I think because of graph, showing the inequities of the first-past-the-post electoral system, was linked from the comments in a Guardian “Comment is Free” article.

Personally the year was slightly eventful: alongside the usual holidays (Westendorf for skiing and the Lake District) I had a little operation after which, somewhat surprisingly, I was confined to the house for 6 weeks in September and October. It was an odd time, ultimately I found I got on quite well confined to the house reading and doing little things in programming disturbed only intermittently by the fear that, health-wise, things weren’t going to plan. I still struggle to understand where my blog lies with regard to personal and private, for a while I kept a diary which was like a blog. My diary was never particularly personal: it recorded facts and where I was when, with the odd diversion into slightly longer entries on books I had read.

Somewhat less common this year for me were photography blog posts, aside from the photos for a calendar, the holiday posts above and a solitary walk post, I don’t seem to have done many this year. Mrs SomeBeans aka The Inelegant Gardener has been much more active on the photography front.

This September we installed photovoltaic(PV) solar panels, to go with the thermal solar panels we got a couple of years ago. PV solar is made economic by the feed-in-tariff, which is exceedingly generous, on our East facing roof we generate approximately the same amount of electricity as we use during the late summer. Now, with the panels covered in snow, we generate nothing. This was also the year of Shiny, my new HTC Desire: not really used as a phone but more a laptop replacement for the home and I also got myself a Kindle ebook.

I’ve enjoyed reading through my blog posts; they provide reminders of my mental activities. I like to maintain the facade that blogging is just for me, but in truth I’m pathetically happy to see the viewing stats rising on a post.

Happy New Year to you all!