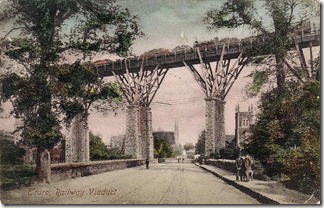 This week I’ve been reading L.T.C. Rolt’s “Isambard Kingdom Brunel: The definitive biography of the engineer visionary, and Great Briton”. The book was written in 1957, it comes with a substantial foreword highlighting the unrivalled access that Rolt had to the Brunel family papers referring back to Samuel Smiles, an early biographer of the Victorian engineers, as an inspiration. It also contains a couple of provisos as to how current thinking differs from Rolt’s book, slightly in Rolt’s dismissal of one of Brunel’s contemporary critics and more substantially in his accusation that his business partner, John Scott Russell, was largely responsible for the enormous difficulties faced in the construction of the ship SS Great Eastern.

The book is divided into three parts: the first covering Brunel’s early life, marriage and training. The second his role in the Great Western Railway and the third in his ship building activities.

Isambard Kingdom Brunel lived 1806-59; he had a French father, Marc Brunel who had fled France following the Revolution and an English mother, Sophia Kingdom. Marc Brunel was a significant engineer in his own right, responsible for one of the earliest production lines (for sailing “block” manufacture). Before the age of sixteen the young Isambard was apprenticed to Henry Maundslay (in London) an engineer and Abraham-Louis Breguet (in Paris) a maker of chronometers, watches and scientific instruments – both men exceedingly highly regarded in their field.

Isambard’s first engineering job was as the onsite engineer for the Thames Tunnel which his father had designed, at the time Isambard was 20. The tunnelling was enabled by his father’s invention of the tunnelling shield, tunnelling seems a generous description of the process – really it was “building a brick tube slightly beneath (and sometimes not) the floor of the Thames River”. The whole enterprise was highly dangerous, with the Thames breaking through into the tunnel several times – killing a number of the tunnellers. The tunnel was not finished during Isambard’s tenure.

Following this experience Brunel started to put forward plans for engineering jobs around the country; one of his first designs was for the Clifton Suspension Bridge in 1831, at the time this came to nothing in part because of the Bristol Riots which had come about when the House of Lords voted down the Great Reform Act. Meanwhile he was also commissioned to act as engineer for what he called the “Great Western Railway”, linking London to Bristol – having surveyed an initial route. His plan was accepted and much of his initial work was in pushing an act through parliament to enable the building. It’s striking just how mobile Brunel was in his days of supervising the building of the Great Western Railway, in a time before railways and other rapid means of transport he was criss-crossing the 120 miles of the route at a staggering rate. He seems to have this in common with William Smith – maker of the first geological map of Great Britain.

The Great Western Railway ultimately extended into Devon and Cornwall, where Brunel constructed a series of timber viaducts. None of these remain in their original form, they were built at a time when cheap, very durable timber was available from the Baltic, subsequently supplies of timber were not so cheap, or durable and such structures became uneconomic and were replaced with brick or masonry. Also in the West Country Brunel constructed an “atmospheric railway” between Exeter and Newton Abbott. The engineering high points of the Great Western Railway were the Royal Albert Bridge at Saltash, and the Box Tunnel – outside Bath.

The final third of the book covers Brunel’s shipbuilding activities, the SS Great Western – the first purpose built trans-Atlantic steam ship, the SS Great Britain an early iron-hulled and propeller-driven trans-Atlantic passenger ship and finally the SS Great Eastern. The Great Eastern was accurately described as a leviathan – eventually completed in 1858, it was not surpassed in size or weight for 40 years. Its construction: delayed, over-budget, subject to protracted legal and commercial wrangling, accident prone, appears to have contributed to Brunel’s early death. Originally the ship was intended for the England-Australia route, its enormous size meant it should have been able to make the journey without re-fuelling with coal. Ultimately it was most successfully used as a cable-laying ship – laying the first trans-Atlantic telegraph cable, its large size meant it could carry a lot of cable and the combination of paddle and propeller drive meant it was exceedingly manoeuvrable.

One activity I was unaware of was Brunel’s part in designing, building and shipping a temporary hospital to the Crimea, at Renkioi, this task was completed in just five months from start to end.

A couple of things strike me about Brunel: firstly, the work he was doing was at the cutting edge of technology – when he planned the Great Western Railway the first passenger railway in the world had only just been built, the SS Great Britain was amongst the first propeller and iron-hulled ships, similarly the atmospheric railway – yet these were enterprises on a large scale. Secondly, the engineer was much more in the board room and in parliament arguing for enabling acts than is the case now. As a result of a fractious episode of “In our time” I flippantly suggested that Brunel built steam engines for fun, but reading this book – I don’t think he did, there’s little sense of joy, only driving ambition. I am still enormously in awe of Brunel. I am a sort of scientist who sees no great division between science and engineering, men like Brunel had a scientific approach to their work but also left a lasting, tangible mark on Britain not only in the things they physically built but the ideas and methods they introduced. I’ve attended a conference dinner on the SS Great Britain, where we toasted IKB rather than the queen.

As a memorial to Isambard Kingdom Brunel the Institute of Civil Engineers determined to complete the Clifton Suspension Bridge, shortly after his death. I think he would have liked it, both as a memorial and a thing of engineering beauty.

Further Reading: Analysing the paint on the Saltash Bridge (here and here) by Patrick Baty.