First light–images of the sun

The sky at night!

Book review: Measure of the Earth by Larrie D. Ferreiro 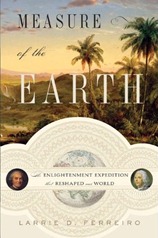 This post is a review and summary of Larrie D. Ferreiro’s book “Measure of the Earth” which describes the French Geodesic Mission to South America to measure the length of a degree of latitude at the equator. The action takes place in the 2nd quarter of the 18th century, the Mission left France in 1735 with the first of its members returning to Europe in 1744.

The book fits together with The Measure of All Things by Ken Alder, which is about the later French effort to measure a meridian through Paris at the turn of the Revolution in order to define the metre, The Great Arc by John Keay on the survey of India and Map of a Nation by Rachel Hewitt on the triangulation survey of the United Kingdom.

From a practical point of view a non-spherical earth has implications for navigation – ultimately it was found that polar flattening would lead to a navigational error of approximately 20 miles in a trans-Atlantic crossing although at the time of the Mission it was believed it could have been as much as 300 miles. Politically the Mission provided an opportunity for the French to form an alliance with the Spanish, and to get a close look at the Spanish colonies in South America which had provided huge wealth to Spain over the preceding 200 years. Ferreiro provides a nice overview of the L’Académie des Sciences under whose aegis the mission was conducted,and of the Comte de Maurepas, French minister of the navy and sponsor of the Mission.

Louis Godin, an astronomer, was the senior academician and nominal leader of the mission. Pierre Bouguer, was a mathematician, astronomer and latterly geophysicist: as well as the measurement of the degree of latitude he also attempted to measure the deflection of a plumb-line by the mass of a mountain – an experiment which Nevile Maskelyne was to conclude successfully in 1775, I wrote about this here. Bouguer also wrote a treatise on ship building whilst away in South America. Charles-Marie de La Condamine could best be described as an adventurer although he was also a competent mathematician and geographer, it was his more lively writing on life in South America which would have a bigger impact on their return to Europe.

The scheme for the determination of the length of a degree is to measure the length of a meridian (a line of longitude) close to the equator by triangulation, making a ground measurement baseline to convert the angular measurements of the triangulation survey into distances and a second baseline to confirm your workings; the latitudes of the ends of the triangulation survey are determined astronomically by measuring the positions of stars. I’ve read of this process before, the new thing I learnt was the method for aligning up your zenith sector with the meridian – which I’m tempted to try at home.

These measurements were done in the area around Quito, in modern Ecuador (named after the equator), the endpoints of the survey were at Quito in the north, close to the equator and Cuenca approximately 200 miles south. During the survey, through the Andes, the team scaled peaks as high as Mont Blanc (and suffered altitude sickness for their troubles) which would not be climbed for another 50 years. The survey was repeated in the early years of the 20th century and even then it took 7 years – the same length of time as the original survey, due to the transport difficulties presented by the terrain.

The work of measuring the meridian was made more difficult by the journey to get there (which took the best part of a year), the terrain and conditions when they got there (mountainous and cloudy), the poor leadership of Godin, local political machinations and the mother country cutting them loose financially. Ferreiro makes a lot of Godin’s poor leadership, some of which is justified – he spent Mission money on prostitutes and regarded the Mission funds as his own purse. Frequently the Mission split into two groups, one containing Bouguer and La Condamine and the other Godin – sometimes this is quite appropriate, in duplicating measurements for consistency whilst on other occasions it is simply fractiousness.

To a degree the Mission was scooped by measurements made above the Arctic Circle in Lapland, this mission was also promoted by the L’Académie des Sciences, led by Pierre Maupertuis (a rival of Bouguer) and Anders Celsius. It completed its work in 6 months, well before the Geodesic Mission had finished their work, discovering that the poles of the earth were flattened. However, doubts remained over the results and the full determination required the data from the equator. Bouguer presented this on his return to France, to great acclaim, showing that the earth was flattened by 1 part in 179 (later measurements showed that the flattening is actually smaller at 1 part in 298).

The Mission spawned a wide range of publications by its members, covering not only the geodesic component of the work but also regarding life and nature in South America. Ferreiro credits La Condamine’s work in particular has setting the context of how South America was viewed for quite some time after the mission. The Spanish officers also made in impact an highlighting colonial misrule back to their home country. Arguably the international collaborative elements of the Mission set the scene for the measurements of the transit of Venus later in the 18th century.

Ferreiro makes a comparison between the French Geodesic Mission, which was centrally run by the state and the British Longitude Prize, which although state funded was privately executed, implying that the former was superior. It’s not clear to me whether he’s engaging in a degree of hyperbole here, since the Mission was to some degree an organisational car-crash and was in large part funded from La Condamine’s own purse at the time. Furthermore, L’Académie des Sciences also awarded prizes – having copied the British government in this and the Royal Society was from the outset a very internationally oriented organisation. So the picture as Ferreiro presents it is something of an over-simplification.

I found the book very readable, its clearly based on a large quantity of primary source material and covers a great deal beyond the simple mechanics of the Geodesic measurements.

My Evernotes on the book are here.